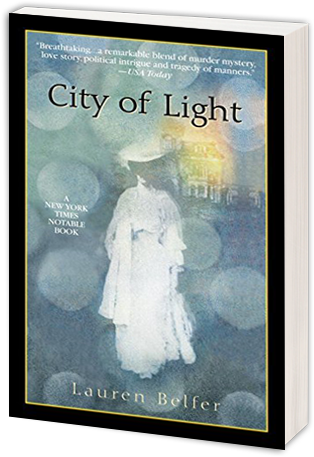 The year is 1901. Buffalo, New York, is poised for glory. With its booming industry and newly electrified streets, Buffalo is a model for the century just beginning.

Louisa Barrett has made this dazzling city her home. Headmistress of Buffalo’s most prestigious school, Louisa is at ease in a world of men, protected by the titans of her city. But nothing prepares her for a startling discovery: evidence of a murder tied to the city’s cathedral-like power plant at nearby Niagara Falls. This shocking crime–followed by another mysterious death–will ignite an explosive chain of events. For in this city of seething intrigue and dazzling progress, a battle rages among politicians, power brokers, and industrialists for control of Niagara. And one extraordinary woman in their midst must protect a dark secret that implicates them all

Praise for City of Light

“An ingenious first novel. . . . Alive with historical figures who mingle seamlessly with the fictional characters. . . . A huge, sprawling portrait of the United States at the turn of the last century.”
– New York Times Book Review

“Like Niagra Falls itself, it’s breathtaking in its achievement. Lauren Belfer’s first novel is a remarkable blend of murder mystery, love story, political intrigue, and tragedy of manners. . . .

“Vibrant characters and a riveting plot will keep your eyes glued to the pages.”
– Glamour

“Belfer’s microscopic attention to details of the period . . . give[s] the book’s fabric the dense quality of tapestry.”
– Chicago Tribune

“A gift for social nuance . . . shapes this compelling debut. . . . [A] rich mix of fictional and historical figures. . . . With the assurance of an established writer, Belfer delivers a work of depth and polish. . . . Irresistible to the last page.”
– Publishers Weekly

“An ambitious, vividly detailed, and stirring debut novel offering a panorama of American life at the beginning of the 20th century. . . . Very gripping. A remarkably assured and satisfying first novel.”
– Kirkus Reviews

“Quite simply electrifying. . . . [A] rich novel. . . . [Belfer] creates a fascinating, disquieting world in which nothing is what it seems. . . . To Lauren Belfer’s endless credit, City of Light is panoramic, subtle, and very physical.”
– Amazon.com